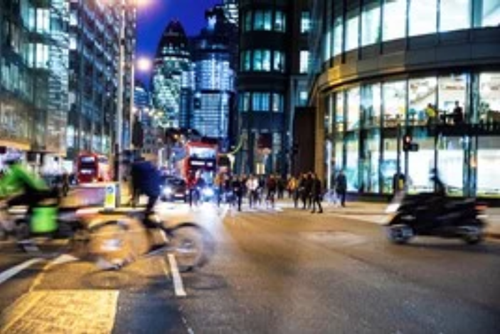 Picture the scene: it’s London, February 2030. The city’s new mayor has just announced a complete ban on petrol and diesel vehicles entering the area within the M25, ahead of the previous target and spurred on by some competitive announcements from Paris, Berlin and Shanghai.

Diesel buses were phased out by 2025 and have been replaced by electric and hydrogen vehicles. London’s economy has now benefited by £4 billion a year from having cleaner air through reduced costs of treating lung disease and lost working hours.

More than 50% of public transport journeys are delivered by smart integrated transport apps which has resulted in a drop in the price of travel: more than half the time it is 40% cheaper to use mobility as a service (MaaS) compared with owning private vehicles – equivalent to a 10% pay rise.

Private car journeys now account for less than 20% of miles travelled in London (in 2017, this was 37%), while increased use of autonomous vehicle technology in the city has reduced the annual number of road collisions and deaths from 3,500 and more than 100 respectively to almost zero.

“This is clearly something of a Utopia vision of mobility in 2030, but it does describe the potential outcomes of the system-wide disruptions we have been tracking for more than five years,” says Charlie Simpson, partner and head of mobility 2030 at KPMG.

“What we can say with some degree of confidence is the scale of disruption we are seeing across automotive, energy, infrastructure and logistics, as well as public sector, represents fundamental discontinuity.

“It is one that throws up huge opportunities as well as challenges, and demands changes in behaviour from all of us.”

KPMG’s report looks at ‘how consumers and businesses can seize the benefits of the mobility revolution’.

It finds that the automotive, transport and wider mobility market is undergoing a transformational social, technological and economic shift, fundamentally changing the way people and products are moved.

Many sectors, beyond automotive and transport, are being disrupted, with new markets emerging, existing ones converging and others declining and possibly vanishing.

“New forms of mobility are critical to support tomorrow’s population hubs and economic activity,” it adds.

“Today’s mobility systems suffer from congestion, inefficiency, accidents and high prices, but the future promises convenient, safe and economic mobility, with less impact to health and the environment.”

Christoph Domke, director of mobility 2030 at KPMG, adds: “We go into a phase which is
probably the biggest transformation in a generation.

“It is very much driven by the supply side forces of connectivity, autonomy, mobility as a service and electrification of vehicles and alternative powertrains.”

Here we look at some of the report’s key findings.

Despite there being only three million electric vehicles (EVs) worldwide at the end of 2018 – 1% of the total vehicle parc – electrification is undoubtedly top of many OEMs’ agendas, says KPMG.

Volvo, for example, has pledged that all cars it launches from next year will be either hybrids or fully electric, with most major carmakers making significant investments in electric technology.

KPMG expects growth in the popularity of EVs will accelerate through to 2030, by which time EVs could account for 69% of car registrations and 57% of van sales.

The Government’s environmental and health policies – which include a proposed ban on selling new conventional petrol and diesel cars and vans by 2040 – are, arguably, the biggest catalyst for consumers going electric.

The report says incentives such as higher vehicle excise duty on diesels and the continuation of the plug-in car grant will complement the roll-out of a more comprehensive charging infrastructure and reductions in the total cost of ownership (TCO), which Domke says should achieve parity with diesel and petrol cars soon.

Battery packs typically account for 40% of the cost of an entire EV. When the first mass-market EVs were introduced in 2010, their batteries cost an estimated $1,000 (£765) per kWh.

Today, Tesla’s Model 3 battery pack costs $190 (£145) per kWh, with the cost expected to further halve by 2030 due to technological developments and production scale economies.

“We think that we will have a positive TCO case in the UK from as early as next year,” says Domke.

Mobility as a Service (MaaS)

One of KPMG’s main hypotheses is the move away from single-owner, single-use vehicles towards multi-user vehicles.

However, here the report is guilty – like others – of being selective in its use of figures from the Department of Transport.

In fact, the percentage of all adults aged 17+ with a driving licence has increased from 69% to 74% over that time due to the rise in women drivers.

What appears to be happening is people are deferring taking their driving test, perhaps until they finish college or due to the cost of insurance. And it’s here that MaaS can step in to fill the travel gap.

Many consumers are likely to want to access a mobility service or mode when they need it, just as they have shifted from ownership to access in other parts of their lives, such as music and entertainment.

“If you look at the top five ride-hailing companies in the world, they are worth a staggering $150bn (£116bn),” says Domke.

While this is dwarfed by the five largest OEMs which have a combined value of £355bn, these have been in existence for much longer.

KPMG estimates the global mobility ecosystem will be worth more than three-quarters of a trillion pounds by 2030.

It expects to see different models emerging during the transformation of mobility. For example, with OEMs it sees two dominant archetypes: ‘metalsmiths’ manufacturing ever more sophisticated vehicles but ceding the customer interface to mobility providers, and the ‘gridmaster’, which would manufacture vehicles, but also provide platforms for a variety of mobility services.

“Despite their challenges, the major car companies are going to remain at the heart of this transition at least for now,” says Simpson.

“There was a recent article in the UK press which described the situation as carmageddon. We don’t think it is quite that bad, but it is clear there is a huge amount of angst in the automotive industry.

“That’s not surprising because mobility throws their 100-year-old business model based on engineering excellence into uncertainty, driven by the move from value in the metal, which they well understand, to value in the service.

“What happens when the ultimate driving machine is less of a relevant proposition in this new world and when the winning players are around building digital platforms that aggregate fleet capacity on one side and dynamic consumer demand on the other? These are skills the telecoms and tech players are very good at, but the carmakers significantly less so.”

The rise of connected and autonomous vehicles (CAVs) offers an opportunity to transform the world by fundamentally altering the way people and goods move.

KPMG says CAVs could improve safety and congestion, while opening up independent mobility to people currently excluded by transport services, such as younger or older travellers.

Domke says autonomous vehicles are currently being trialled at 35 locations globally, while more or less every major OEM has recently announced target dates for Level 4 (high automation where the vehicle performs all tasks in most conditions, but the driver must be ready to intervene) or Level 5 (full autonomy) pods on public roads.

However, even this may be an unrealistic target, with the market instead launching iterations of Level 4 autonomy, gradually expanding the areas where such vehicles can travel.

KPMG says the onset of CAV should decrease the overall number of vehicles, but the number of journeys and total distance travelled is likely to rise due to increased vehicle utilisation.

“The statistic we heard is that on average, private vehicles are used somewhere between 4% and 5% of the day, but vehicle utilisation will rise towards and beyond 50% in the connected vehicle world,” says Simpson.

Initial projections for the UK suggest that total passenger miles travelled could rise by up to 10% between 2015 and 2030.

This will be driven by more affordable on-demand mobility services, as well as greater access to groups currently excluded, such as the young and elderly.

However, KPMG expects the adoption of autonomous technology for LCVs to outstrip that of passenger cars, given the TCO benefits, safety improvements and the pressing need across the CV sector to find a solution to driver shortages.

The report adds: “We are also seeing significant investment into automated technology for last-mile deliveries through personal delivery device robots and drones.”

Delivery vehicles will increasingly be equipped with teams of drones and ground transportation robots that can be launched to make multiple deliveries across an area.

“We expect such investment to skyrocket over the next few years,” adds KPMG.

“One big question is if, in the EV world, we no longer have to stop to fuel our cars at petrol stations what are BP and Shell going to do with their existing fuel forecourt businesses and the associated retail revenue?” asks Simpson.

“We know Shell has acquired (EV chargepoint supplier) Newmotion, (energy provider) First Utility and (EV charging start-up) Greenlots, while BP has acquired Chargemaster, so they are already reimagining this future and diversifying some of this risk.”

A different challenge is facing local authorities. “One of their big issues is the decline in public transport revenues, and how the authorities are going to be responding as these propositions become cheaper and more attractive,” he adds.

The UK Government will also have to find a way to plug the revenue gap caused by a potential loss of £28 billion of road fuel duty.

“Our view is that this inevitably implies a further move towards road pricing and access charging,” he adds. “That is politically incendiary, but we believe that is a logical end point.”

Simpson says another challenge for Government is how it ensures mobility solutions are economically and socially inclusive.

“If mobility services are purely seen as a service for wealthy metropolitan areas, this is going to be a real roadblock in terms of rolling this out nationally,” he adds.

For more than 120 years Goodyear has pursued innovation and invention. As mobility evolved, it partnered with pioneers in everything from lunar exploration to land speed records to drive change and discovery.

At the recent Geneva Motor Show, Goodyear demonstrated this continual pursuit of innovation by launching its latest concept tyre and vision of the future, the Goodyear AERO.

The Goodyear AERO concept is a two-in-one tyre designed for the autonomous, flying cars of the future.

With mobility companies looking to the sky for the answer to the challenges of urban transport and congestion, our work on advanced tyre architectures and materials led us to imagine a multimodal wheel that could serve both as a traditional road tyre and a “propeller” for flight.

The resulting design is a tilt-rotor concept with a unique non-pneumatic structure whose load-bearing fins can double as fan blades.

This would be flexible enough to dampen shocks when driving on the road, and strong enough to rotate at the high speeds necessary for the rotors to create vertical lift.

With capable vehicles, the AERO would give future commuters the freedom to move seamlessly from the road to the sky.

Some of the technologies within the AERO – such as the non-pneumatic structure or intelligent tyre capabilities – are inspired by existing products or ongoing research and development projects.

We may be a long way off flying our everyday commute but thinking like this enables us to stretch the imagination and spark debates on future mobility challenges.

Hear more from Charlie Simpson this November at Fleet Mobility Conference by securing your place now.